“One day, two very different rallies. Here’s what Mississippians are saying about the abortion ban”

In the morning, a federal judge heard arguments about the state’s fetal heartbeat abortion ban, set to go into effect July 1.

Mississippi wasn’t alone in rallying over abortion issues Tuesday. Events around the country — including one outside the U.S. Supreme Court — protested a series of laws passed by states in recent months meant to severely restrict abortion access. Many are similar to Mississippi’s new law, designed to halt abortions once a fetal heartbeat is detected, or about six weeks into pregnancy. 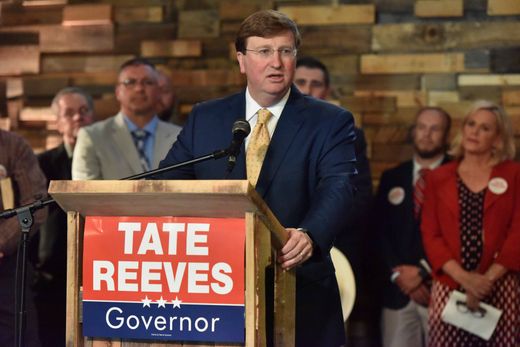 The lieutenant governor held a news conference at Lakeshore Congregational Methodist Church in Byram, announcing a “pro-life coalition” of about 150 supporters that now back his campaign for governor later this year.

About 25 were in attendance Tuesday, including pastors, public officials and other activists who have sought stricter abortion laws in Mississippi.

Reeves has sought to portray his most prominent opponent, Democratic Attorney General Jim Hood, as too liberal for Mississippi. But on the issue of abortion it’s a tricky argument to make, as Hood’s office defended the state’s strict new abortion law in federal court Tuesday, and has defended other abortion restrictions in prior years.

Reeves’ speech skipped over Hood Tuesday, instead criticizing the “national liberals,” who want to “expand abortion even more.”

“Abortion is evil,” Reeves said. “It is the greatest evil of our time. If you believe as I do, that these are living human beings, then what we are witnessing across our country is not a political issue. It is a moral issue. It is good versus evil, it is right versus wrong.

“I’m thankful today that I can say to you, that if you want to change the world, have a child,” said Herring, an anti-abortion activist. “We recently saw that since 1986, births are at their lowest rate in the nation, and I think that’s sad, because we have got to encourage people to choose life, and we have got to welcome life.

“I’m encouraged by the success of the heartbeat bill,” she added. “The universal sign of life is a heartbeat.”

“I’m proud of the Senate, I’m proud of the House, I’m proud of our governor for passing the heartbeat bill,” said Gipson, the state agriculture and commerce commissioner. “And it couldn’t have been done without the leadership of Lt. Gov. Tate Reeves. Thank him for that.”

Gipson added: “It couldn’t have been done without courage and boldness. I was the recipient of, and I know Tate Reeves has been the recipient of, hate mail from across this country — from those who believe in death, and do not believe in life. God said I put before you life, and death, choose life, that you may live. And we choose life here in Mississippi.”