PEARL — For a moment on Monday evening, Terry Reeves stood alone and looked around the warehouse where his oldest son, Tate Reeves, had just officially kicked off his 2019 campaign for governor.

The elder Reeves, a smile affixed to his face as he absorbed the scene, stood in the metal shop of his multimillion-dollar heating and air conditioning company he built, where his son had just taken the latest step in an otherwise unlikely political trajectory.

Steel ducts and stacks of cardboard boxes containing Goodman and Amana air conditioners served as the backdrop of the makeshift stage where Reeves delivered his speech. The company was founded in 1975, its metal shop added in 2003.

The shop wasn’t the only thing Terry Reeves built that year, when he laid the foundation for his son’s swift ascent to political power in his first campaign for statewide office.

“I’m very proud today,” Terry Reeves told Mississippi Today. “I really didn’t think Tate would go into politics. But he did, and I couldn’t be more excited about it. I’m just proud.” 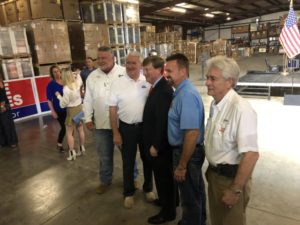 Tate Reeves was just 28 years old in 2003 when he first ran for state treasurer. An investment banker with Jackson-based Trustmark with no previous government service experience, he was a political unknown at the time. He faced a competitive Republican primary and, later, a tough Democratic challenger with a resume stacked with government experience.

“I had doubts about that first race (in 2003),” said Arnie Hederman, a lobbyist and close friend of Reeves’ who has served as chairman and executive director of the Mississippi Republican Party. “He was young and had never run for anything. You know, when you’re running a statewide race, you need money. It was a three-way primary, and I knew that’d be tough.”

With uncertainty looming over his son’s candidacy, Terry Reeves started making calls. Serving as the campaign’s treasurer, he reached out to his associates who did business with Climate Masters, collecting tens of thousands of dollars from friends in the HVAC industry. Over those next few months, he helped his son’s campaign raise just over $600,000, a staggering fundraising total for such a young, unknown down-ticket candidate.

Terry Reeves also personally donated $115,000 over the course of that year — about 20 percent of the 2003 campaign’s fundraising total. And every dollar counted in the tight general election.

His Democratic opponent Gary Anderson was a formidable candidate with more than 15 years of state government experience as head of Department of Finance and Administration and deputy director of the Mississippi Development Authority, the state’s economic development agency.

In the general election, Reeves outraised Anderson by about $250,000 and won by just six points, or about 45,000 votes. While experience and fundraising were part of the campaign, many believed race was the deciding factor in the election.

“I don’t think it would be a contest if Gary Anderson were not black,” Leslie McLemore, the civil rights leader and longtime Jackson city councilman, told The Clarion-Ledger that year.

Although Anderson became the closest African American to win a statewide seat in the state’s history until that point, Reeves also made history in winning election as the youngest statewide official in the state’s modern history.

“We’ve worked to help him over the years, and things look good,” Terry Reeves said on Monday. “It really is something.”

The newly elected treasurer took it from there. The young Republican turned heads in the Jackson at a time when Mississippi Democrats, who controlled state government from Reconstruction through the 1980s, saw their power wane. As treasurer, he built a reputation for his willingness to stand up to established politicians. He built relationships with the state’s power brokers, including influential lobbyists and corporate leaders.

Campaign cash hasn’t been a problem for Reeves since. By the time he ran for reelection as treasurer in 2007 and, subsequently, for lieutenant governor in 2011 and 2015, his father didn’t have to donate much to his campaigns. But while his father’s financial influence is no longer necessary, the values he instilled have continued to drive his son’s policy efforts, particularly regarding the state’s budget.

Terry Reeves grew up in the southwest Mississippi town of Bogue Chitto, crammed into a two-bedroom home with 10 brothers and sisters.

By the time Tate was born, his father’s business was well on its way to success. The small business that was founded in 1975 grew into a multimillion-dollar company that now employs more than 100 Mississippians.

“He personifies the American dream of pulling yourself up by the bootstraps, building a successful business and giving back to the community,” Tate said of his father in a 2003 interview with Sid Salter, then at The Clarion-Ledger.

“My most vivid memories of early childhood are waking before dawn on Saturday mornings to spend the day with my dad working in his family-owned business. It was on these long Saturdays that my dad taught me the most important thing that his dad had taught him: the importance of hard work is the equation of success.”

His father’s business success inspired a chain of events that inspired Reeves to seek public office, he told several journalists during his 2003 campaign. It drove Reeves’ decision to study finance at Millsaps College, where he was involved with the student stock portfolio club. He graduated in 1996 and became a Chartered Financial Analyst, a rare credential offered to just 20 percent of candidates who begin the rigorous, multi-year program.

He started his career at Park South Corporation, a subsidiary of then-Deposit Guaranty National Bank. He then moved over to Trustmark National Bank, where he managed a $300 million portfolio for well-connected individuals and institutions, a 2003 Clarion Ledger article states.

While at Trustmark, he worked on bond issues with the state’s treasurer’s office, a connection that ultimately helped inspire his entrance into politics.

At his campaign kickoff on Monday, Reeves focused his 15-minute speech on jobs and the economy. He boasted about his work to create jobs, reduce government spending and extend tax cuts to corporations doing business in the state, promising to continue the “right track” economic model championed by Republican Govs. Haley Barbour and Phil Bryant.

“As governor, it will be my mission to make Mississippi the home of more new business permits and more plant expansions per capita than any state in the South,” Reeves said before shifting to criticize a potential general election challenger.“We are going to make Mississippi the No. 1 destination for job creation. I fought to cut taxes of job creators. I competed with Jim Hood and the liberals on that, and I won. Now I’ll tell you — Jim and his liberal friends like to blame me for the largest tax cut in Mississippi history. Well, I say to Jim and his liberal friends: bring it on. We must continue to create an environment that encourages private sector job growth.”Reeves mentioned Hood by name several times in the speech but did not speak about his GOP primary challengers, Bill Waller Jr. and Robert Foster.

Flanked by his three daughters and wife, Elee, with his mother, Dianne Peeples, looking on, Tate Reeves specifically mentioned his efforts to extend a scholarship program that would give parents of special needs children vouchers to send their kids to private schools. Reeves’ eleventh-hour move to slip the voucher program into an unrelated budget bill upset even some Republicans at the Capitol.

Reeves mentioned his father’s upbringing and called his dad “one of the hardest working men I know,” garnering extended applause from the nearly 200 people in attendance.

Later, he introduced several attendees to his son, took a few pictures and directed campaign volunteers where to move signs and other campaign paraphernalia.

“This is such a meaningful moment for our family in a place that holds so many memories and life lessons,” said Todd Reeves, Tate’s brother and Terry’s youngest son. “It’s a place and an event that reflects what our mom and dad taught us growing up: Always keep God first, and if you’re willing to work really, really hard, you can accomplish great things.”